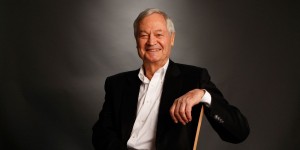 Here’s some remake news that doesn’t fill me with bafflement and rage, and concerns one I’m actually pretty hungry for. Currently shooting in Peru is Death Race 2050, a timely update of the beloved Roger Corman exploitation classic Death Race 2000, which last year celebrated its 40th anniversary.

The original film starred David Carradine, Sylvester Stallone and a host of weaponised cars used to plough their way through the general populace. Directed by Paul Bartel (Eating Raoul), the film was produced by legendary ‘King of The Bs’ Corman, who is also working his magic on the new film. Death Race 2000 was remade loosely (and, it must be said, shoddily) in 2008, a version memorable only for a couple of scenes that required Jason Statham to emote. At least the comedy in the original was intentional.

Directing Death Race 2050 is G.J. Echternkamp (Virtually Heroes), with a cast that counts mighty genre actor Malcolm McDowell among its ranks (playing the Chairman), as well as Manu Bennett (30 Days of Night) as Frankenstein (Carradine in the original), Marci Miller (Most Likely to Die) and Anessa Ramsey (Rites of Spring, Southbound). 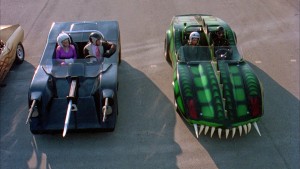 “This is an amazing opportunity for me and millions of Death Race 2000 fans to experience the intensity, thrills and dark humor of the original, fueled by a terrific young cast, spectacular vehicles and side-splitting action, literally” says Corman of the new vision. “Roger Corman’s Death Race 2050 puts the pedal to the metal to bring this enduring franchise to a whole new level.”

Indeed, great as Death Race 2000 is, it does leave room for the ante to be upped in terms of vehicular carnage, and I for one can scarcely wait to see what they come up with. Death Race 2050 is released through Universal 1440 Entertainment, and will be available exclusively on Blu-ray, DVD and Digital HD later this year. Meanwhile, Death Race 4 is apparently in the works, if you’re interested.