UNIVERSAL AND BLUMHOUSE TO TACKLE THE THING 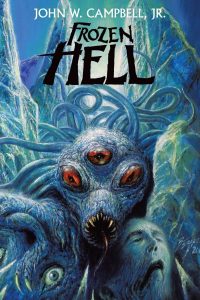 John W. Campbell Jr.’s 1938 novella Who Goes There? has already been adapted twice, serving as the basis for Christian Nyby’s 1951 film The Thing from Another World and John Carpenter’s 1982 film The Thing, the latter of which received it’s own half-remake, half-sequel in 2011. Now Universal and Blumhouse are working on a brand new adaptation of the sci-fi author’s work—but rather than using the novella as inspiration, they’re turning to the novel-length version that was only recently unearthed.

Titled Frozen Hell, the novel is the original, unabridged version of Campbell’s infamous story, which had to be trimmed for publication. Lost for decades, the manuscript was discovered in 2017 by novelist and biographer Alec Nevalla-Lee, who was digging through a box of Campbell’s papers at the Harvard Library as part of his research.

A Kickstarter to release Frozen Hell was successfully funded the following year, allowing readers to finally experience the 45 pages that Campbell had to cut. These pages add backstory and context that expand the story dramatically, meaning this adaptation from Universal and Blumhouse may offer something a little different than the previous films we’ve seen.

Executive producer Alan Donnes first announced the film on Facebook, with John Betancourt, the creator of the Kickstarter, later adding that the film is being fast-tracked.

“This is just the tip of the iceberg of what’s going on with Who Goes There?, Frozen Hell, and The Thing in Hollywood,” Betancourt teased in a recent Kickstarter starter. “I can’t talk about the rest yet, but it’s very exciting—and if all goes as planned, The Thing will be alive and well for quite a while.”