Universal Pictures plans to make a feature based on the novel Final Girls by author Riley Sager. This title is not to be confused with the 2015’s films Final Girls and Final Girl – confusing we know. This is an entirely – well not entirely – different story. 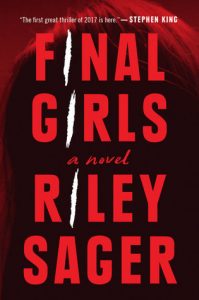 It sounds like an intriguing whodunit slasher tale will blend the past with the present, hopefully piecing together a puzzle that will be surprising and shocking. If you haven’t read the book yet, then now’s the time!