Uncover the Mysteries of The Suffering in New Trailer

Get your first taste of Breaking Glass’ indie chiller The Suffering with this creepy and atmospheric trailer.

Nick Apostolides (The House Across the Street, The Haunting of Alice D) stars as Henry Dawles, whose personal life is in shambles. With an empty bank account and a baby on the way with his estranged wife, he is forced to take a job appraising a rural country estate for a mysterious recluse named Remiel, played by Phil Amico (You’re Fuck’n Dead!). 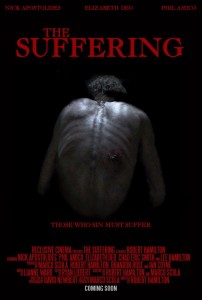 The Suffering, which is directed by Robert Hamilton (Key) won the Audience Award at the Skyway Film Festival following its premiere there in 2015.

Elizabeth Deo, Regen Wilson and Chad Eric Smith also appear in the film, which will play a few big screens in Los Angeles from July 29th and is available on DVD and On Demand from August 2nd.

Property appraiser Henry Dawles must fight for his sanity when he finds himself trapped on a rural farm owned by a mysterious caretaker, Mr. Remiel. As the threat to Henry escalates, he is forced to face the horror of the farm and uncover the dark mysteries of Remiel and the sinister beings he encounters.