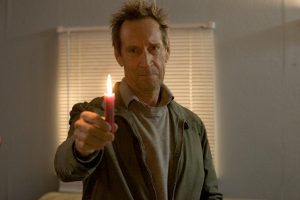 Supernatural forces threaten to tear apart a young family in British horror Firstborn, which lands at selected UK cinemas on October 14th. A VOD release is planned for the same day, with a DVD to follow closely behind on October 17th.

Firstborn had its premiere at the Edinburgh International Film Festival in June, and was described in the festival programme as “a powerful and scary new British film”, that “evokes domestic-style horror films of the 1970s.”

Charlie and James are just starting their lives together; young and in love, they’re relishing having no responsibilities, until Charlie discovers that she is pregnant. In a moment of youthful abandon, they decide to keep the baby.

Into their world comes Thea, a beautiful little girl. But her arrival brings with it terrifying entities that threaten their newly formed family, things that are beyond their understanding. Panic stricken, the young parents enlist the help of James’ estranged father Alistair, a dilapidated would-be occultist whose obsession drove his family apart and led his son to despise him. He diagnoses Thea as a beacon – a child whose very presence attracts the attention of the supernatural creatures that surround us. Charlie and James realise that they must dedicate their lives to protecting their unplanned daughter. 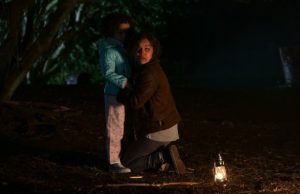 Firstborn stars Misfits’ Antonia Thomas and Luke Norris (Poldark) as the increasingly frightened couple, with Eileen Davies (Sightseers, High-Rise), Lucy Chappell (The Theory of Everything) and Crimson Peak’s Jonathan Hyde as Alistair. It was directed by Nirpal Bhogal (Sket), from a script by himself and Sean Hogan (The Devil’s Business).