Soda Pictures have acquired UK distribution rights for The 9th Life of Louis Drax, the latest from Alexandre Aja (Haute Tension, The Hills Have Eyes), Variety are reporting. The film is Aja’s first as director since 2013’s Horns. 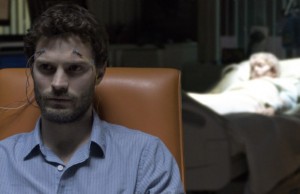 ‘The 9th Life of Louis Drax’ begins on Louis Drax’s 9th birthday, when he miraculously survives a near fatal fall. His doctor Allan Pascal (Dornan) finds himself tangled between his professional responsibility and his growing affections for the boy’s mother (Gadon), a fragile young beauty. When Louis’ father (Paul) comes under suspicion, Pascal realises other mysterious forces may be at work. With echoes of ‘The Sixth Sense’ and ‘Gone Girl,’ ‘The 9th Life of Louis Drax’ is a supernatural thriller filled with unexpected twists and turns.

Though no UK release date has been set, we should be seeing the film sometime late this year.