The original poster for 1973’s The Exorcist is iconic, featuring the classic scene where Father Merrin arrives outside Regan’s home to rid her of her demons. However, we have a couple of unused poster concepts for you to check out below, which show a very different marketing strategy. 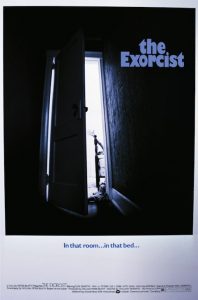 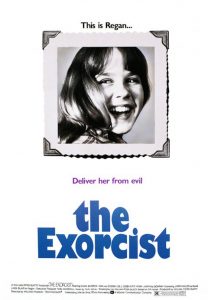 The problem with both posters is that they don’t show the Exorcist himself. If you ignore the story of Regan’s possession, you’ll see that the film is still left with a very complex exploration of loss and identity surrounding Father Merrin. The title itself encourages us to focus on him, just as much as the struggles faced by Regan and her family.

That being said, the image of the outstretched hand in the doorway is an appropriately spooky image, so that could have worked as an effective lure for horror audiences. The contrasting light and dark is a classic and simple reflection of the film’s battle between good and evil, so we love this one too.

When speaking about the creation of the poster that was eventually chosen, the poster’s designer, Bill Gold, said:
“I’d been specifically told by William Friedkin and Warner Bros. that we must not use an image of the girl possessed, or show anything that had any hint of religious connotation. They were very concerned about that. Friedkin was very involved, and he and Warners rejected all our other comps.

I picked the still of the priest, Father Merrin,, arriving at the house in Georgetown for the exorcism with a briefcase in his hand because it struck a chord with me. When you looked at this still, you knew somehow that whatever is about to happen inside that house is not going to be good! I adapted it by taking a lot of the detail out of the photo and turning it into a design, and after that no one wanted to see anything else.”