Two New What We Do in the Shadows Posters Have Bite

A couple of new posters have been revealed for the upcoming TV follow-up to What We Do In The Shadows and they certainly have bite. They’re also retro and bright, focusing on the fangs and bat-identities of its characters. We’re excited. 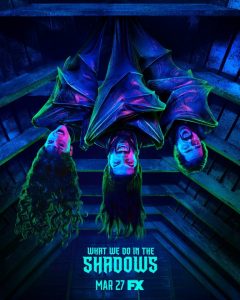 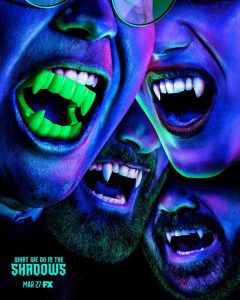 What We Do in the Shadows will be a half-hour series comprising 10 episodes, with the pilot written by Jemaine Clement and directed by Taika Waititi. It will focus on a new set of vampires, played by some British comedy favourites. Rotten Tomatoes has reported the following:
“Much like the movie, the series follows three vampires who live together: Laszlo (Matt Berry), Nadja (Natasia Demetriou), and Nandor (Kayvan Novak) — the former two are husband and wife. Also living with them is a fourth vampire named Colin Robinson (Mark Proksch), who’s an ‘energy vampire.’ Instead of blood, he sucks the energy out of his victims by boring them to death with mundane anecdotes and bad jokes. The office is his feeding ground, but his powers also work on his vampire roomies.

The main action is put into motion when our central three vampires receive notice that an ancient leader vampire named the Baron is coming to pay them a visit from abroad, purportedly to see how conquering America is going.”