It’s a new dawn and a new day, so it’s a new set of Alien: Covenant images for me – and for you. Check them out below. They show David/Walter (Michael Fassbender) getting up to some suspicious business and also show him peering off the edge of the ship where we last saw Dr. Elizabeth Shaw (Noomi Rapace). 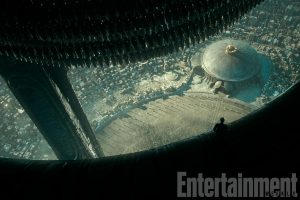 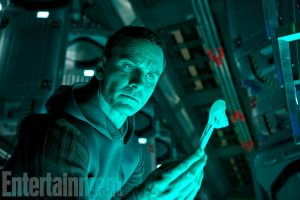 Synopsis:
Bound for a remote planet on the far side of the galaxy, the crew of the colony ship Covenant discovers what they think is an uncharted paradise, but is actually a dark, dangerous world — whose sole inhabitant is the “synthetic” David, survivor of the doomed Prometheus expedition.

The footage and imagery we’ve seen so far have teased a pretty scary addition to the Alien universe, but Fassbender promises that Ridley Scott’s latest will pose bigger questions about life and what may lie afterwards. He said:
“On top of action and humour and characters you become invested in, there’s these very real questions about life and the origins of life and what happens in the afterlife — if there is an afterlife.”

Answers (and probably more questions) will be revealed when Alien: Covenant is released on 19th May 2017.