Luna Films has announced that Twin Peaks’ James Marshall and Louis Mandylor (In the Eyes of a Killer, My Big Fat Greek Wedding) have signed on to star in tough crime drama series Three Knee Deep, which goes into production in Bucharest in January 2018.

Marshall (pictured) played James Hurley – the secret boyfriend of murdered homecoming queen Laura Palmer (Sheryl Lee) – in Twin Peaks, recently reprising the role for the show’s revival. He has previously appeared alongside Mandylor in both 2009’s In the Eyes of a Killer and 2010’s The Cursed. 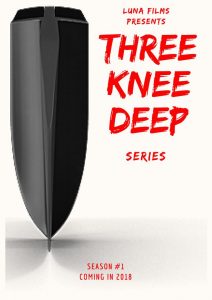 Both will appear alongside the already-cast Holt Boggs (Bomb City), Manuela Harabor (Hotel of the Damned), Adam Horner and Marius Stanescu.

From the Three Knee Deep press materials:
“A harrowing psychological drama set against the backdrop of the world of ‘black op’ special rendition and detention, the show will follow the lives of a handful of criminals incarcerated in a secret prison and the lengths that certain government officials will go to get what they want.”

Bobby Barbacioru directs and produces under his Luna Films umbrella. The show’s first season will consist of 5 episodes, and will be shopped to networks upon completion.