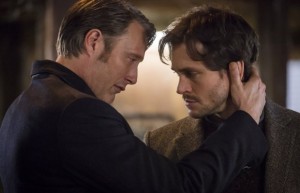 For those of you who are fans of the TV show portrayal of the famous Silence of the Lambs cannibal in Hannibal, we have some unfortunate news as the show has officially been cancelled.

Rumours have been going around stating that they were only carrying on with a new series for the sake of the fans. After the third series, there will be no fourth, so you’ll have to get your fill of fava beans in this final series.

It’s sad news for the blood drenched and fleshy show as it was quickly becoming a fan favourite horror series.

Creator Brad Fuller and NBC gave statements on the news:

“NBC has allowed us to craft a television series that no other broadcast network would have dared,” said creator Bryan Fuller, “and kept us on the air for three seasons despite Cancellation Bear Chow ratings and images that would have shredded the eyeballs of lesser Standards & Practices enforcers.

“‘Hannibal’ is finishing his last course at NBC’s table this summer,” he continued, “but a hungry cannibal can always dine again.”

“We have been tremendously proud of ‘Hannibal’ over its three seasons,” added NBC. “Bryan and his team of writers and producers, as well as our incredible actors, have brought a visual palette of storytelling that has been second to none in all of television — broadcast or cable. We thank Gaumont and everyone involved in the show for their tireless efforts that have made ‘Hannibal’ an incredible experience for audiences around the world.”