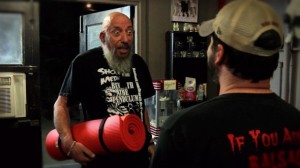 Put on your jimjams because a second series of Adam (Hatchet) Green’s webseries Scary Sleepover is on its way! The series – which sees Green inviting very special guests from the horror world for a slumber party and a natter about their work – has picked up quite a following, and can be seen on the ArieScope Youtube channel.

“My goal with Scary Sleepover is to bring the fans even more up close and personal with some of their favourite artists in a more candid and inherently humorous short format video show”, Green told ArieScope, whose show gives fans the chance to see these icons “don their favourite pyjamas, roll out a sleeping bag, play games, eat junk food and act like children.

“I’m excited to share some of that with my extended genre family in a fun and slightly absurd way that they otherwise would never get the chance to experience”, Green continues, “I mean, how often in life will you get to see Sid Haig in a onesie?”

Series 2 is currently being filmed and will be available late this year.