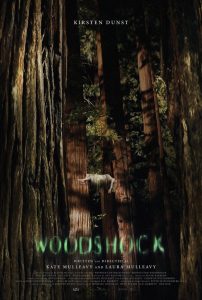 Ahead of the imminent trailer, this rather cool poster has arrived for nightmarish trip Woodshock, which stars Kirsten Dunst as a woman who slips further and further into a deep state of paranoia after ingesting a potent hallucinogen.

The film comes from A24, who are steadily building a strong and carefully selected catalogue of genre titles, having put out The Witch and Green Room, and looking to keep the quality up with the upcoming It Comes at Night.

Woodshock was written and directed by fashion designers Kate and Laura Mulleavy (pictured), making their first foray into filmmaking. Along with Dunst, it stars Pilou Asbæk (Ghost in the Shell, The Great Wall), Lorelei Linklater (Boyhood) and Green Room’s Joe Cole.

Keep an eye out for that trailer!