It’s always intriguing when a feature film is chosen to be adapted for a TV series, but with Bong Joon-ho’s (The Host, Mother, Okja) Snowpiercer I don’t think that’s the case. If anything, I could have easily watched hours and hours more of the intense and visually striking post-apocalyptic world set solely on a train. 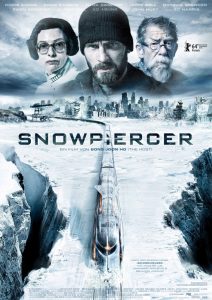 Seven years after the world has become a frozen wasteland, the remnants of humanity inhabit a gigantic, perpetually moving train that circles the globe.

We look forward to seeing how the series expands on the film’s preoccupations with social clashes and survival, and whether Joon Ho’s perfection can be matched in an extended time frame. We are confident that a series has a lot of potential to delve even further into the film’s concerns with society, politics and life after devastation.

Scott Derrickson is at the helm of the 60-minute pilot episode, so that’s even more a reason to get excited about the show. TNT’s Snowpiercer will air in 2018.