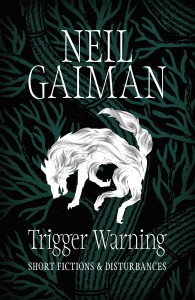 Trigger Warning is a short story and poem collection by Neil Gaiman intent on finding those little pressure points that cause the most unease and arouse reflection, maybe even disturb you a mite.

There’s some little gems here but first I’ll explain why I like Gaimans wondrous prose and fascinating stories. He thoughtfully exploits the story twist and role reversal better than anyone but it’s the little things that stick with me, shown perfectly in The Man Who Forgot Ray Bradbury.

Now that sentence probably wouldn’t appear in most people’s favourite quotes and to be fair it’s easily passed and forgotten, but it stayed in the forefront of my mind as I listened to the audio. So much so that I spent 30 minutes desperately trying to find it in the kindle version. This perfectly shows the way Neil Gaiman thinks and writes, exploration of a mute fancy that no-one else would even consider wasting a second on, all in a sentence and that’s why I love it.

Gaiman travels far and wide in this collection, from the last of the Time Lords to Sherlock Holmes and honey bees, from the fancifully dark fairy tale to Shadow from American Gods traveling through my home region of the Peak District encountering ghosts and murder.

The Truth is a Cave in the Black Mountains is a haunting tale of travel and treasure, family and murder, darkness, revenge and regret, desire of the soul. A true delight and I will certainly revisit the illustrated version of this story.

‘The Misty Isle is not as other places. And the mist that surrounds it is not like other mists.’

Nothing O’Clock sees the return of the Doctor and a foe worthy of terror, what can only be described as strangeness beyond belief starts with a person wearing an animal mask buying a house for cash. It soon becomes wholesale as property everywhere is being bought for cash by people wearing animal makes and they want one thing, for you to ask them the time.

Sherlock Holmes makes an appearance in The Case of Death and Honey as Mycroft breathes his last and case of research in a far off land into honey and a particular bee. The Sleeper and the Spindle is a delightful cross of fairy tales with Sleeping Beauty and Snow White and the seven dwarfs.

There’s far too many stories and favourites to mention them all but safe to say I enjoyed this immensely, Neil Gaiman is one of my favourite authors and an incredibly talented guy. The absolute perfect medium to pull back that thin veil between worlds and explore the darkness beyond. A simply masterful story teller.

Just as captivating is Neil Gaiman himself talking about the stories and those little triggers, things that upset us, leave our heart beating overtime, shock, not gore but mind messing at its best.

‘What we read as adults should be read, I think, with no warnings or alerts beyond, perhaps: enter at your own risk.’