The Trailer for Trench 11 is Pretty Gruesome

A gruesome trailer has been unleashed for war horror film Trench 11. The film comes from director Leo Scherman (White Knuckles, Never Forget) who directs a script co-written by himself and Matt Booi.

The trailer shows a team of soldiers going beneath the trenches to try and stop a German plot that could change the entire course of the war. Once there, the already horrifying act of war takes a darker turn when the plot they unearth turns out to be devastatingly monstrous. 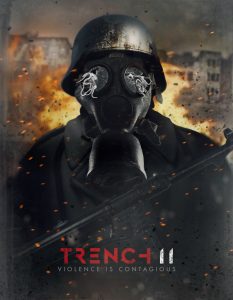 In the final days of WWI a shell-shocked tunneller must lead an Allied team into a hidden German base…100 hundred feet below the trenches. The Germans have lost control of a highly contagious biological weapon that turns its victims into deranged killers. The Allies find themselves trapped underground with hordes of the infected, a rapidly spreading disease and a team of German Stormtroopers dispatched to clean up the mess.

The only thing more terrifying than the Western Front… is what lies beneath it.

Trench 11 stars Karine Vanasse, Rossif Sutherland, Charlie Carrick, Rob Archer and Ted Atherton. You’ll be able to catch the film when it premieres at this year’s Screamfest, which runs from 10th-19th October 2017. Other films include Tragedy Girls, Leatherface, Dead Ant and Ruin Me.