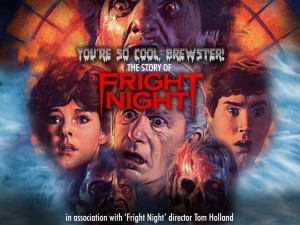 The trailer for Fright Night documentary You’re So Cool, Brewster! has arrived, and it promises something pretty damn special. Featuring interviews with director Tom Holland as well as pretty much the whole cast, the film looks to be a real gift for fans of the 1985 vampire classic.

You’re So Cool, Brewster! The Story of Fright Night is written and produced by Gary Smart, whose previous documentary Leviathan: The Story of Hellraiser and Hellbound: Hellraiser II clocked in at a mighty 476 minutes. A similarly heroic runtime is expected for his new film, allowing for an extensive and in-depth look at the beloved film, its 1988 sequel and their impact on the genre since. Also under the spotlight will of course be the Colin Farrell-starring 2011 remake, as well as its 2013 sequel. Which did not star Farrell, and I’m pretty certain no one watched.

As if you really needed it, the official synopsis helpfully reads: Fright Night is one of the most beloved horror films of the ‘80s. Featuring exclusive interviews from key members of the series, go behind the scenes of Fright Night and Fright Night Part 2 with this ALL-NEW retrospective feature documentary.

You’re So Cool, Brewster! will be released for home viewing later in 2016. And it’s gonna be great.