The Trailer for 200 Hours Treats Sleep as a Disease 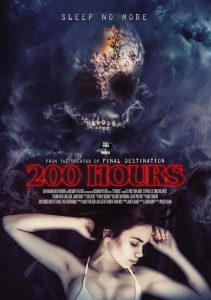 We all know if you stay awake for too long things start to get a little crazy. You feel like you’re outside of your own body, like time is slowing down and you weigh 100x times more than you do. Imagine staying up for 200 hours straight and trying to “break through” whatever there is to break through; that’s the concept of this new horror-thriller from the creators of Final Destination.

Aptly titled 200 Hours, the film has a Flatliners vibe as a group of young adults try to “cure” sleep, like it’s a disease that can be eradicated. It’s an instantly intriguing concept, but the trailer is less than exciting. Rather than focusing on the unique psychology of staying awake and the nightmarish consequences of not sleeping, the trailer shows supernatural frights that could have been ripped out of 1,000 other horror films. Check it out below.