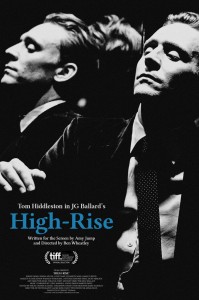 Hopes are definitely high for Ben Wheatley’s (Kill List, Sightseers) next directorial effort High-Rise, from acclaimed author J.G. Ballard (Crash) and starring Tom Hiddleston, Jeremy Irons, Sienna Miller and Luke Evans. The star-studded and twisted feature has screened, so far, to so-so reviews and has split audiences right down the middle. What we can gather from the array of opinions is that it’s mind-boggling and unique, but a bit of a mess. Definitely something you’re not going to want to miss, anyway.

Synopsis:
Two miles west of London, Dr. Laing moves into his new apartment seeking soulless anonymity, only to find that the building’s residents have no intention of leaving him alone. Resigned to the complex social dynamics unfolding around him, Laing bites the bullet and becomes neighbourly. As he struggles to establish his position, Laing’s good manners and sanity disintegrate along with the building. The lights go out and the elevators fail but the party goes on. People are the problem. Booze is the currency. Sex is the panacea.

Check out the new trailer for High-Rise below and delve into its wonderful and crazy world that literalises the class system. The upper class live the high life at the top, while the middle and lower classes make do at the bottom. What is quite obviously a comment on urban lifestyles and the warped human psyche, High-Rise looks like one hell of a ride that we can’t wait to jump into.

High-Rise will be released on 18th March in the UK.