Tortured Souls is a slightly unusual project from Clive Barker. The story was divided into six parts and each part was included with a figure from the Tortured Souls collection. These figures were brought to life by Todd McFarlane (creator of Spawn) and were based on the characters from the story.

We are taken to the decadent and putrid city of Primordium, which is ruled by cruel and corrupt leaders. No one man can stand up to them; no one, that is, until an assassin, Zarles Kreiger, is offered the opportunity. Before he has a chance, he must first be reshaped at the hands of a man named Agonistes. Legend has it that Agonistes was created by an exhausted God on the seventh day, and given terrible gifts. He shares these terrible gifts with those who come to him, offering either death or excruciating transformation. Through each chapter in the book we are introduced to a new tortured soul as the story of Primordium develops. The other characters are Talisac, a sick doctor working for the leaders of the city; his creation, Venal Anatomica; and his child, Mongroid. 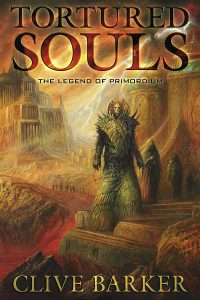 This is classic Clive Barker, revealing his familiar obsessions with transformation of the flesh, sado-masochism, love, and sexuality throughout. From the tormented descriptions of the transformed, there is more than a little cenobite in them. Although the transformed are agents of revenge and death, there is also a surprisingly strong bond of love between Krieger, also known as the Scythe-Meister, and Lucidique. Despite their vile appearances to the rest of the world, they find beauty in each other and are perfect together as lovers and companions – a wonderfully taboo intimacy.

Barker has created a fantastic world in this novella, rich and full of vibrant characters. The only drawback with the novella is that it’s a novella. After reading this, I think of how much more could be told from this world. It sparks the imagination and leaves you wanting more. Unfortunately, it doesn’t seem that there will be a follow up, as this originally came out in 2001.  There was a second series of the figures created by Barker and McFarlane which did not include any additional story and there was also talk of a film adaptation that never came to fruition.