Tome of Terror – Scare Us 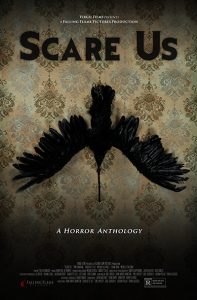 The chilling anthology Scare Us opens with masked serial killer Cutthroat claiming two more victims in the sleepy town of Sugarton. But what unfolds the following night is far more disturbing and sinister.

It dropped on VOD and DVD yesterday (June 29th), the movie finds local bookstore owner Peter Metus [Tom Sandoval] assembling a small group of aspiring young writers. There’s Claire [Charlotte Lilt], Diego [Michael C. Alvarez], Naomi [Michelle Palermo] and Mikey [Ethan Drew]. Peter has tasked them with telling their own tales of terror. Those macabre stories – Night Haul, Dead Ringer, Untethered, The Resting – involve vampires, the supernatural and family demons. However, the would-be authors soon discover that Cutthroat has targeted them, too…. And their time is quickly running out.

Producer, head director and co-writer Ryan Johnston – who also co-directed the Night Haul segment – recently spoke with Scream Magazine about the Scream-inspired Cutthroat, the importance of bookending the anthology and those graphic moments on screen.

Scream: How did Scare Us come about?

Ryan Johnston: Scare Us is an idea that originated with myself and Jason Wiechert, who is the CEO of Falling Flame Pictures, the company that produced Scare Us, as well as a lead producer on the project. Jason and I had talked a while back, around 2016. We wanted to find an outlet for a film that we felt could be very community based and community driven. We thought we’ve got great filmmakers in Arizona, and I have a lot of friends and peers I went to film school with and are very talented. But it was difficult to get features made, so a lot of content coming out of Arizona was these well-crafted short films.

So, the idea came about when we were like, “What if you could get a group of filmmakers together for the sole purpose of everybody creating short films, but with the bigger intention of it all being in one film?” We talked to some filmmakers in Arizona to see if they would be open to the idea, and they were. Fast forward a couple of years later and we had the opportunity to merge and work with Falling Flame Pictures, who was an immense collaborator in the process of the final product of Scare Us. Collectively together with Jason Wiechert, myself and Falling Flame Pictures, we were able to craft the skeleton story, which is everything regarding Sugarton and the main storytellers and Peter Metus.

How important was it to bookend these stories, to make it all cohesive and come together?

It was very important. We knew going into it, as you see in the film, the only character that doesn’t have an ill demise is Claire. One thing we really want to drive home about the horror genre is that a lot of times, you see the good guys win. In this case, we were like, “You know, we should make these stories end grim. Every character who writes them should end grimly and come to a demise. That’s how we were able to bookend a lot of the short films. Every character in the end meets their maker. Nobody really makes it out. The only character who makes it out of the entire story is Claire.

It was important for us, because we centred her around being the main protagonist and Peter being the mysterious antagonist of the skeleton. We wanted to make sure the connection between these two characters carried all the way until the end of the film. With that being said, it was important for us to have a beginning, middle and end for the skeleton and that the other stories could live within that same genre, but still have grim ends to keep that main story open-ended.

Cutthroat is the slasher waiting in the shadows. What was the thought process behind him visually and in terms of his motivation?

Visually, a lot of where the inspiration took place for Cutthroat for me is from Scream. It was definitely one of those films that rocked me to my core. I always admired that film’s ability as a slasher film to not only create a slasher movie, but it created such good tension. So, a lot of the inspiration for Peter Metus came from Scream. If you watch, there’s a couple of reminiscent shots where I kind of wanted to pay homage a little bit and the style, with the knife coming up in the air and cutting away.

Also, again from Scream, if you remember Stu, he had a vibrant personality throughout the film. You liked Stu because he was kind of the comic relief and then he ended up being one of the killers. I wanted to pull that away, too. I wanted people to be, “I like Peter.” He’s over the top and that’s what I enjoy about the character.

For the motivation of the character, I wanted a little bit of a sleeping giant. We wanted to craft something that when you look at Peter initially, you think he’s a pretty easy-going guy. He seems like the only person in the group that tries to avoid any confrontation. He’s trying to be the peacemaker throughout the whole time. He seems like a loveable guy. He pushes and gives advice. He’s designed for it to be all part of his plan. But he’s there to finish the work of his father, that he had done years earlier. For Peter, it’s a very personal thing. It’s personal on a level of family and that connection.

Can you introduce us to your central character Claire?

Claire is very much the town weirdy, I guess. She is fascinated by the things most girls her age shouldn’t be fascinated in. Most girls are interested in makeup and who is the newest pop star on the radio. For Claire’s character, I wanted to create a more detective-type role. She’s fascinated by the character of Cutthroat. She likes asking the uncomfortable questions. She dives into the mind of who, what, where, when and why? You can see that there is a definite disconnect with people similar to her age in the book circle. She seems to only primarily connect with Mikey when it comes to the theories and ideas of Cutthroat and who he is. But Mikey is a child. Kids are fascinated by things like that. You look at someone like Claire, it’s like, “No, you need to take this more seriously. This is a big deal. You are too old to have these theories yourself.” I wanted to create that interest and that intrigue with her character and showcase that she’s definitely somebody that stands out from the herd.

When it came to the books and the storytellers, I wanted each character to feel very unique and very different. I took a lot of inspiration of that from one of my all-time favorite films, Breakfast Club. I was always fascinated by how a lot of the characters in the high school were so different from one another, but a lot of those circles still ran together. In our film, it’s kind of similar.

Despite the body count, there isn’t much blood in the movie. What were your thoughts on the gore?

It was definitely a joint collaboration. When you have an anthology, there are so many elements of different styles and genres of horror that you are making. There was a conversation between me, Jason and the rest of Falling Flame about how far we wanted to push the envelope when it comes to the actual gore. For us, it’s always scarier to hear something and not necessarily see it visually. Your mind opens a little more to interpretation. But at the same time, you don’t want to put everything under the blanket and not show anything at all, either. You don’t want the audience to say, “Argghh… I want to see more gore.” We had to find this fine line.

We opted to allow for the gore in the parts that we felt rightfully should show gore, to add to the story. For example, in Night Haul, you don’t see the security guard being ripped apart below the waist, but you see a lot of the blood shooting out from under the doorway. For us, because we are dealing with a creature that hides it in darkness, the force is more heard when the vampire shrieks throughout the hallways. That’s more terrifying because it’s a creature that lurks and hides in the darkness, and we felt it should kill the same way.

Then, when it came to Cutthroat and the way he executed people, he’s quick. He’s efficient. I wanted a serial killer that ran, that moved quickly, because you don’t see a lot of that in films. In a lot of the old-school horror films, they are walking. We felt this one should be quiet, efficient, fast and then on to the next.

Peter wants to teach Claire a lesson. As the final girl, what do you believe she learned from this ordeal?

What Claire learned is a couple of things. First and foremost, she believes that monsters are real. They don’t just exist in the stories. They can be right in front of you, and you wouldn’t even know it. She had somebody betray her, who she trusted and cared for and ended up being the very villain she sought and tried to discover and didn’t even know. He was right in front of her.

Now, the question is with Peter leaving her the journal, what will she take with that? Now that she knows monsters exist in the world, where does she go from there? In the beginning of the film, she was a happy-go-lucky character, who just watched her friends be brutally murdered in front of her by somebody she trusted as a friend. What does that do to somebody? The big lesson for her is the understanding that the world was not all sugar plums and fairy dust.