The horror writer, director and actor Tom Holland is stepping back into his directing shoes for Rock Paper Dead, a horror-thriller that centres on serial killer Peter ‘The Doll Maker’ Harris. Peter returns to his family home after being released from a hospital for the criminally insane, but his childhood memories begin to surface and lead him to rekindle past, murderous desires. 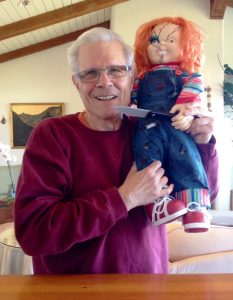 Holland is the director of 1985’s Fright Night and 1988’s Child’s Play, but he hasn’t directed a feature film since 1996’s Thinner. He has dabbled in the directing of TV episodes and a few short films, but it will be great to see him at the helm of something a little longer.

To help bring his film to the screen, he has screenwriter Victor Miller (Friday the 13th), composer Harry Manfredini (Friday the 13 1-6, House) and make-up artist Vincent Guastini (Child’s Play 3, Silent Night). So far, actor Vic Stagliano has been cast in the role of Earl, but the lead killer is yet to be announced.