It may be a fixture on many a ‘worst films ever’ list, but I have a lot of love for 2001’s Freddy Got Fingered, and I know I’m not the only one. The much-reviled comedy was the brainchild of Tom Green and while he did subject himself to some pretty horrific scenes, it’s fair to say that his upcoming role in a supernatural horror film is something of a surprise.

Sounding like a more serious take on cult comedy Drop Dead Fred, Bethany sees a young woman named Claire (The Bunnyman Massacre’s Stefanie Estes) returning to the home she grew up in, only to be haunted by her childhood imaginary friend. Green plays Claire’s psychiatrist, alongside fellow ‘90s icon Shannen Doherty, who plays her late mother. The film also stars Zack Ward (Freddy Vs. Jason, Resident Evil: Apocalypse) and Anna Harr (The Curse of Sleeping Beauty) as the titular ‘friend’. 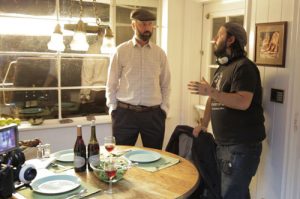 Bethany is directed by James Cullen Bressack, who’s previous credits include 13/13/13, Pernicious and 2012 shocker Hate Crime, which remains banned in the UK. Bressack also wrote the script together with Ward.

Bethany was picked up for distribution at the AFM by Uncork’d Entertainment, who are planning a limited big screen run and VOD release for early 2017.