A big piece of news from over the weekend came from Spawn creator and comics giant Todd McFarlane, who unveiled via Facebook that Blumhouse will be producing his Spawn feature script, meaning that his new Spawn movie is actually gonna happen!

McFarlane has been working on the script for years, and is admirably insistent on producing and directing himself, but has until now struggled to find sufficient backing to begin production. McFarlane has confirmed, unsurprisingly, that his script ignores everything from Mark A.Z Dippé’s family-friendly 1997 adaptation, which proved a pretty miserable failure both critically and commercially, and left fans of the comics feeling well and truly duped. 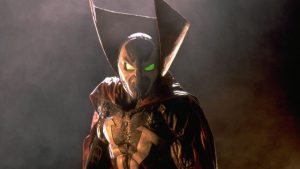 It is not known how close the film is to production, and how the deal with Blumhouse will affect McFarlane’s vision. With a very different cinematic landscape with regards to comic-book adaptations from that of twenty years ago, not to mention the success of harder, more adult comic book flicks however, Jason Blum’s genre production house could have made a smart move indeed.