The man of your dreams has found his way to your mobile devices, meaning that you can now pit him against his hockey-masked adversary again and again. Yep, that charred-faced, razor-fingered maniac Freddy Krueger is now a playable character in Mortal Kombat X. 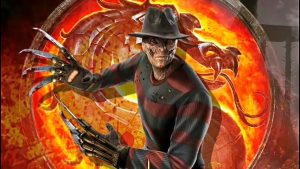 NetherRealm announced at the end of last week that Freddy had been added as a downloadable character, for the time being, exclusive to mobile. This is the dream stalking child killer’s second appearance in the game series, having shown up in Mortal Kombat IX. Once again however, his appearance looks, alas, to be taken more from the 2010 remake of A Nightmare on Elm Street than from Robert Englund’s incarnation of the character.

Joining Jason Voorhees in the mobile version, Freddy comes as part of the Update 1.11, which also includes a bunch of new character costumes as well as a new playable mode called Shao Kahn’s Tower.

There’s also all kinds of other characters too but really, Mortal Kombat X is now all about Freddy vs. Jason, surely.