TO YOUR LAST DEATH GETTING BLU-RAY RELEASE

Bloody animated horror film To Your Last Death, which had its world premiere at London’s Arrow Video FrightFest last year, is getting a Blu-ray release! 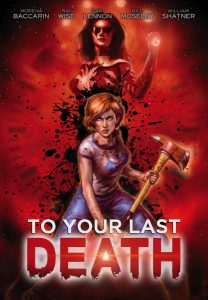 Directed by Jason Axinn and co-written by Jim Cirile and Tanya C. Klein, To Your Last Death features a star-studded voice cast, including Morena Baccarin (Deadpool, Firefly), Ray Wise (Twin Peaks, Jeeper’s Creepers 2), Dani Lennon (The Love Witch, Bite Me), Bill Moseley (House of 1000 Corpses, Repo! The Genetic Opera), and William Shatner (Star Trek, The Twilight Zone). The film follows Miriam, the sole survivor in a deadly revenge game set up by her father to punish his children. After a supernatural entity offers her the chance to go back in time and try again, Miriam must survive both her father’s blood lust and the Gamemaster’s ever-changing rules to save her siblings as she relives the worst night of her life.

To Your Last Death releases on Blu-ray on October 6th. Get a taste of the games by watching the trailer below!