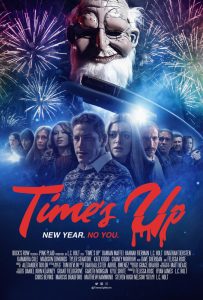 New year. No you.

Upcoming slasher movie Time’s Up is ringing in the new year by revealing its long-awaited teaser trailer, along with a new cast poster from artist Rafael Araújo. The film, which is currently in post-production, follows teachers at an idyllic Maine high school who are stalked by an assailant who seems hellbent on revealing their darkest secrets. It’s New Year’s Eve and the ball is about to drop… but will they drop first?