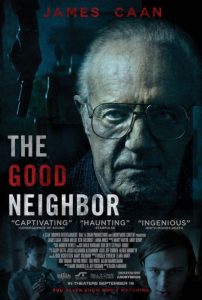 A thrilling trailer has arrived for the Rear Window-esque horror-thriller The Good Neighbor which stars James Caan, Logan Miller and Keir Gilchrist. The film comes from director Kasra Farahani and will be his first feature film.

Synopsis:
In The Good Neighbor, a pair of mischievous high school kids (Keir Gilchrist and Logan Miller) create the illusion of a haunting on an unsuspecting neighbour (James Caan). While keeping his every reaction under surveillance, they see much more than they bargained for.

Check out the trailer below, it looks like it could be a lot of fun if it is able to carry that feeling of intensity throughout the entire film. Plus, James Caan looks effortlessly chilling, doesn’t he? It’s an interesting concept that breaks down the tropes of horror films, much like Cabin in the Woods, but this one ops for a more realistic approach and channels Alfred Hitchcock, rather than Sam Raimi.

This definitely looks like something to keep an eye out for. The Good Neighbor will be released on 16th September in the USA.