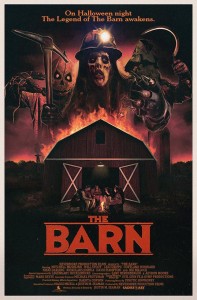 The 1980’s seems to be the last era whose horror output had a definable look and feel, and any number of current filmmakers are now harking back to the days of big hair, rubber beasties and VHS. Be it in the setting and meticulous reference points of Ti West’s The House of The Devil, the heavy metal horror of Deathgasm or the meta smarts of The Final Girls, the ‘80s is back in a big way when it comes to horror.

One of the most promising-looking titles adhering to this trend is The Barn, whose awesomely retro poster, featuring the kind of gleefully lurid artwork so sorely missed in this age of quicky Photoshop jobs and clinical minimalism, appeared last year. Just arrived is a new trailer for the throwback slasher, and it’s one of the coolest I’ve seen in a long while. The Barn is directed by Justin M. Seaman and features a cast filled with new faces including Mitchell Musolino, Will Stout and the rather brilliantly named Lexi Dripps. Also appearing as Dr. Rock is Ari Lehman, sometimes known as Jason No. 1, having played the young Jason Voorhees in the original Friday the 13th.

Synopsis:
It’s Halloween 1989, and best friends Sam and Josh are trying to enjoy what’s left of their final Devil’s Night before graduating high school. But trouble arises when the two pals and a group of friends take a detour on their way to a rock concert, finding an old abandoned barn and awakening the evil inside. Now it’s up to Sam and Josh to find a way to protect their friends and defeat the creatures that lurk within “The Barn”.

I’m getting palpitations of excitement over this one, and although there’s no word of a release date yet, The Barn should arrive this year. It will be made available on DVD and limited big box VHS.