Author Rick R. Reed burst onto the horror scene with his excellent original paperback novels in the early 1990’s from the very missed Dell Abyss line. As with a lot of horror novelists from the 80’s and 90’s, Reed’s presence on the grocery store rack would be short lived. Thanks to the internet and independent publishing, Reed has been highly active in the last several years turning out many books, mostly in the gay fiction genre, however his latest is a return to supernatural thrillers. 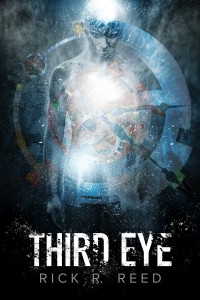 In Third Eye, single father Casey is out looking for his little boy during a thunderstorm when he’s struck by a fallen tree branch. He wakes the next day with psychic abilities, glimpsing into the lives of those around him and visions of things to come. His “glimpses” lead him to the disappearance of two local girls and a quest to find their captors, with little help from authorities. As Casey’s visions become stronger, he’s led closer and closer to a murderous couple who ultimately end up kidnapping his own son.

As the terror mounds, we are reminded of Stephen King’s The Dead Zone with a touch of romance, a rich story of family, and a smoothly blended plot told from the perspective of multiple characters. Reed provides a truly exciting novel here starting with  page one. This is edge of your seat horror at its finest!