The third film in the gore series revival American Guinea Pig is fast approaching, and Stephen Biro of Unearthed Films has taken to Facebook to update us on its progress. Entitled Song of Solomon, the film follows Bouquet of Guts and Gore and Bloodshock, both of which have played a number of genre events since their completion.

“The screenplay is done… just adding character development, history and dialogue,” Biro begins, in an increasingly frenzied, train-of-thought missive that sounds like it was written in something of a haze in the dead of night.

“I’m not fucking around… this is going to be the movie of my life,” he continues; “This is who I am. This is what I am about…

No more stupid ass exorcism movies. No more, made for the money from unbelievers. Blatty believed… made The Exorcist… no one has topped it…

I don’t believe, I don’t have faith, but I know. I fucking know… Huge difference… night and day.

Horror is about, murder, damnation, demons, schizophrenia, insanity and killers… no matter how you look at it, it falls under one of those… Now that we are rolling… I’m going to weave a dream and a nightmare for you. No one, will ever be able to touch it.

I am the Sinner Saint… and this is my life. I don’t like, boasting from my ego… but it’s not. This is my lot in life and I am doing, what I was made for. 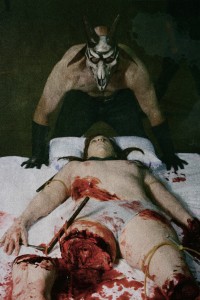 Dubious grammar and misplaced commas aside, it’s a tantalising message from the man who also directed the series’ first instalment, and will executive produce all entries. American Guinea Pig is a continuation of the notorious underground Japanese gore series of the 1980s, which comprised of six films, usually seen on bootleg VHS, until Unearthed’s deluxe DVD boxset.
Song of Solomon is due to start shooting in July.