THERE’S SOMETHING IN THE PILLIGA: Film Review 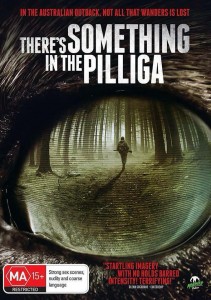 Synopsis:
Two mates looking to celebrate new years eve pick up a couple of girls at a pub and go looking for adventure in the Pilliga National Park. They become stranded and fall prey to a monstrous local legend, Jingra, which is hungry for flesh and thirsty for blood.
Lately a lot of filmmakers have had me eating my own words. I have been very vocal about my distaste for the found-footage genre and yet over the last couple of years loads of great little titles have snuck up and impressed the hell out of me. THERE’S SOMETHING IN THE PILLIGA is one of them.Set on New Years Eve in the far reaches of remote Australia, we follow Dylan & Jay as they drive through the dusty back roads of rural New South Wales in a beastly-looking utility truck. Dylan serves as the camera man filming his mate Jay, who is a colourful, crude and ocker trucker and they’re headed for a pub to celebrate the new year. Later in the evening they rescue two drunken girls from an ugly altercation and find themselves back in the truck and looking for adventure. Their escapade sees them venturing into the Pilliga National Park where things take a sinister turn and a local legend comes out to play.art

North America has the Sasquatch and the Himalayas have the Yeti. Australia (as if it isn’t already packed with enough deadly creatures) has The Yowie, a mythical ape-like creature that was also recently featured in the Aussie film THROWBACK. Director Dane Millerd has taken his love for this mysterious beast and crafted a film with blood, sweat & tears and a hell of a lot of precision. While it presents itself as found-footage, the film evolves throughout the course of events and allows the audience to become enamoured with the characters, particularly Jay. He possesses a unique and oddly terrifying personality that overshadows whatever shortcomings the hand-held format has.

All of the players deliver convincing performances and none are more captivating than Brendan Byrne as Jay. This guy terrified me. At first I thought him to be a caricature of the typical Aussie “bloke” but as the film unravelled I had flashbacks to some of the people I have personally met in outback Australia over the years. To foreign audiences his performance will seem contrived and forced but to an Australian audience it will strike a chord. He is no caricature. Jay may not be the villain in this story but his outback Aussie-redneck-bogantendencies make him one scary son of a bitch who commands the screen as though the love child of Mick Taylor (Wolf Creek) and Chopper Read (Chopper).

The film’s style, pacing and payoffs are all strong and Millerd effectively strings the first half of the story along at a meandering pace, allowing us to get comfortable with the characters so that when they are thrown into their hellish night of horror we are right there beside them. He also provides a believable reason for these people to venture out in to the bush in the darkness of night and avoids many of the tropes and clichés of the genre.

Made on a shoe-string budget with a whole lot of tenacity THERE’S SOMETHING IN THE PILLIGA is a strong, formidable and welcome entry in the found-footage world that toys with exploitation and unearths a folklore that has laid dormant for too long. Millerd has his sights set on a sequel with a much larger budget and presents his film as the ultimate teaser.