THERE’S SCIENCE BEHIND OUR LOVE FOR HORROR

Most of us know that feeling we get when there is a new horror movie about to be launched, or when the season of all things spooky is upon us, but that feeling falls into one of two halves – either excitement and anticipation – or dread of the stomach-churning onslaught to come.

But why is it that some of us actively seek out the scary – whilst others shy away from in – is it really just a preference, or could there be something in our make-up that drives us one way or the other?

Well, research has found out that if we subject ourselves – willingly- to that which scares us it can provide a counterbalance to life’s stresses, undermine anxiety and even boots our capacity to cope. There are some theories that attempt to offer reasons why something positive is a direct result of being scared, one of them is called the ‘controlled environment.

Apparently, when we watch a scary movie we are in fact, triggering our ‘flight or fight’ response but in an environment where we can control the variables. This is much the same as being exposed to something that freaks us out, but in a controlled way until we are not bothered by what used to make us react in a negative way – being afraid of spiders (arachnophobia) for instance. Phobias are treated by exposing us in increasing degrees until we are equipped to deal with whatever the trigger is.

There is another thought that scary movies can actually trigger what is known as ‘good stress’ even though one of the major reasons for lost hours is down to stress – research has shown that manageable periods of stress can offer some positives such as strengthening the immune system so when a bigger threat comes along we are more equipped to deal with it.

But whatever side you fall on, whether you are a lover of the horror genre or you would prefer simply to avoid anything scary there is no doubt that horror is an incredibly successful industry with many spin offs from the most popular movies.

Take for instance, the gambling industry which has capitaliSed on our love of the spooky to such an extent that if you visit a quality pay by phone casino UK you are certain to find games that have been developed in collaboration between the movies maker’s and the game developers with actual video clips and sound bites from movies like Halloween in order to bring those memories of being scared half to death into the gaming environment.

There are many thrill-seeking activities, some more dangerous than others, but temporarily flooding the nervous system with numerous hormones and neurotransmitters such as adrenaline and dopamine much like the feeling of riding a roller-coaster can boost the mood – and this is what some people get from being scared.

Yet it must be remembered that in order to benefit from being scared we must want it. 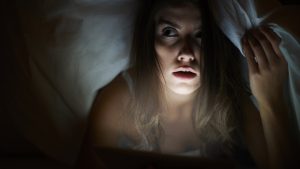 If you are not open to the experience then the results will not be positive with what could be an immediate increase in anxiety and perhaps one that will last longer too – a real negative.

So which side of the coin are you? Do you rub your hands together as Halloween comes around each year or are you one of the many that makes sure they have other things planned for the spooky season?