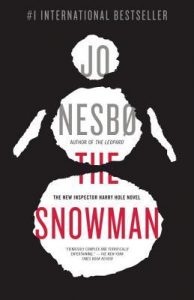 Women are disappearing in the terrifying and intense trailer for The Snowman. Based on the best-selling novel of the same name by acclaimed author Jo Nesbo, the story follows Detective Harry Hole as he investigates the heinous crimes commited by a serial killer known only as The Snowman.

I’ve not read the novel by Nesbo, but after this hard-hitting and Se7en-inspired trailer, it has shot up on my to-read list. It ticks all the boxes that should equate to a gripping thriller; a beautifully shot location that reflects the story’s ice cold themes, a strong cast in Michael Fassbender, Rebecca Ferguson, Val Kilmer, Chloe Sevigny and J.K Simmons, plus, an intriguing and unique serial killer.

The Snowman comes from director Tomas Alfredson (Let the Right One In) and, from the look of the trailer, he has blended his work on Let the Right One In and Tinker Tailor Soldier Spy to craft an elegant, chilling and unpredictable thrill ride.

Check out the trailer below and be sure to catch The Snowman when it is released on 20th October 2017.