There’s an Invisible Man in the Poster for The Unseen

We’ve captured the poster for The Unseen to share with you. The film is a modern re-telling of the classic Invisible Man story and follows a man searching for his missing daughter, and all the while he is becoming invisible. 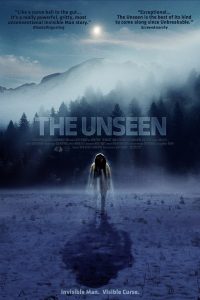 It should come as no surprise to learn that the film’s director Geoff Redknap is known for his make-up effects work on films like Deadpool and Star Trek Beyond. He definitely seems to have transferred his skills to crafting a believable and eerie case of vanishing in The Unseen.

The Unseen stars Aden Young, Camille Sullivan and Julia Sarah Stone. The film screened to overwhelmingly positive reviews after it screened at the Fantasia International Film Festival earlier this year, so we look forward to catching the film when it’s released. Hopefully sooner rather than later!