There’s a Hotel from Hell in this Trailer for Convergence 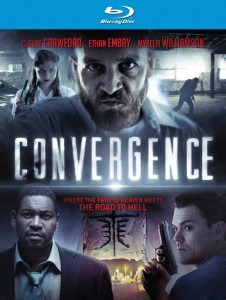 A trailer has been released for the supernatural thriller Convergence and it shows a hospital from hell; well, it works as a gateway between heaven and hell but you get the gist. The trailer looks surprisingly unique and director Drew Hall (The Phoenix Rises, Sons of Liberty) certainly has a flair for stylish visuals.

Synopsis:
Detective Ben Walls (Clayne Crawford) lives a quiet life with his wife and newborn daughter. But he’s called into action after an explosion at a local women’s health clinic – and explosion that may be the work of a terrorist bomber Ben has been tracking. While investigating the scene, another shocking event lands Ben himself in the hospital. When he awakens he is surprisingly uninjured and ready to go back into the field. But at the behest of his captain (Mykelti Williamson) and the hospital’s few but eerily incongruous patients and staff, Ben is forced to remain inside the building.

As Ben navigates the hospital’s alarmingly empty hallways, he soon finds himself hunted by a self-proclaimed avenging angel (Ethan Embry), who may be the terrorist he has been looking for, and haunted by apparitions whose deadly motives remain a mystery. As Ben’s sense of reality begins to spiral out of control and the demons that surround him close in, he must find a way to both stop the supernatural forces that want him dead and catch the bomber before he strikes again.

Considering its synopsis and the purgatory Ben is placed in, expect themes surrounding redemption, truth and honesty. With heap of hard-hitting violence and an effectively interesting use of slow-motion, this trailer definitely paints Convergence as a horror-thriller to look out for.

Convergence will be released on DVD and Blu-Ray on 9th February. You can also pick it up digitally and see it in select cinemas on 5th February in the USA. Sadly, there’s no UK release date yet, but we’ll let you know as soon as one is confirmed.