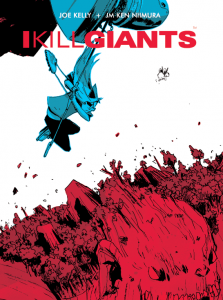 The trailer for I Kill Giants shows one young girl trying to fight the giants that threaten her world. Unfortunately the threat is disbelieved by those around her, so she has to take on the impossible task alone. It looks like a touching and action-packed coming-of-age tale with fantastical undertones and dangers lurking around every corner.

I Kill Giants comes from director Anders Walter and marks his feature length directorial debut. If the film can muster the same level of emotion and fantastical horror that the trailer suggests, then I Kill Giants could rival J. A. Bayona’s wonderfully heart-breaking A Monster Calls. The cast features Madison Wolfe, Sydney Wade, Zoe Saldana, Imogen Poots and Jennifer Ehle.

I Kill Giants will be released in cinemas, on Demand and on Digital HD from 23rd March from RLJE Films.