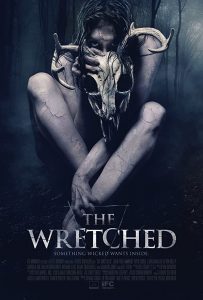 Synopsis:
While staying with his father for the summer, a teenage boy struggling to come to terms with his parents’ divorce starts to suspect there’s something terribly wrong with the neighbour…

As a horror fan, sometimes you want to watch films that are going to rewrite the rules of the genre forever. Other times, you just want to turn off the lights and curl up with a good popcorn flick. The Wretched falls firmly in the latter category, but some strong character development and excellent practical effects elevate this one above a lot of typical genre fare.

Written and directed by Brett and Drew Pierce, The Wretched opens on a delightfully macabre scene: a babysitter arriving at a home only to find the mother doing something unspeakable in the basement. The action then jumps forward thirty-five years, but the pre-credits scene helps to ease us into the film’s retro vibe which, thankfully, the directors know not to go overboard with. The Wretched is certainly reminiscent of some of the low-budget horror movies we love from the eighties, but the Pierces’ direction is assured enough to allow the film to stand on its own blood-splattered feet.

We’re then introduced to our hero, Ben (John-Paul Howard), a teenage boy working a summer job at the local marina while he stays with his father (Jamison Jones). Ben isn’t too enthused about his dad’s new girlfriend (Azie Tesfai), but his simmering teenage angst is tempered somewhat when he meets Mallory (Piper Curda), a laidback coworker with whom he strikes up an easy friendship that slips into a summer romance.

Of course, this is a horror movie, so something wicked inevitably this way comes—and in the form of an ancient child-eating witch no less.

Barring a few notable exceptions, the witch is one of the most underused and mistreated classic horror movie monsters, but the Pierce brothers’ vision is surprisingly refreshing. Animalistic and vicious, this creature inhabits the skin of local women to get close to children. The film signals that it uses these bodies up and tosses them aside in a simple yet effective scene of sagging skin and falling teeth. And as Ben begins to spy on the neighbour who is currently serving as the creature’s unwilling host, we discover it has another means of keeping its existence concealed: making people forget that its victims ever existed.

This plot point, while clever, ultimately forms the film’s biggest stumbling block as the script tries to force in a third-act twist that creates more distraction than momentum. A clumsy (and unnecessary) attempt at giving the hero more motivation as he moves in for the kill, it weakens a movie that was otherwise doing fine just being a fun ride.

While it’s no game-changer, The Wretched puts an interesting spin on the witch-in-the-woods genre. The ending isn’t everything it could be, but between the bone-crunching creature effects and some great chemistry between the young leads, you certainly won’t regret sticking this one on for your next movie night.

The Wretched releases on VOD, digital, and in select drive-in theatres in the US on May 1st, before its digital release in the UK on May 8th.