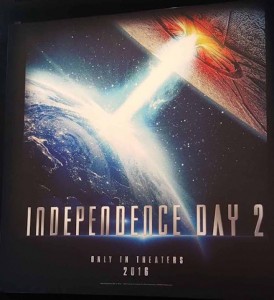 The Licensing Expo is currently going on, and some exciting news has been released in the way of an official synopsis and some perspective concept art for Independence Day 2.

The new still shows that the world may potentially be completely doomed as it looks like the mothership is bigger and more powerful than expected, as it sizes up Earth.

Here’s the newest synopsis for the film:
The powers on Earth have been using recovered alien technology to create an incredible defense program to protect the planet from the intruders. However, the aliens are always two steps ahead with their unmatched technology and power. Will the geniuses of Earth be able to stop the eradication of human life?

Independence Day 2 will be released in theatres June 24th 2016.