The Whisperers Will Arrive in THE WALKING DEAD Season 9 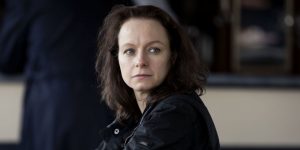 Fans of The Walking Dead comic book series by Robert Kirkman have been chomping at the bit for a nefarious group called The Whisperers to arrive on the TV series. This reclusive tribe dresses in the skins of corpses in order to walk among the dead undetected. News out of Comic-Con this week confirms that The Whisperers will indeed arrive in Season 9, returning to AMC this October. Their enigmatic leader, Alpha, will be played by Samantha Morton (pictured right).

The big unknown, however, is whether this new phase of The Walking Dead will reinvigorate the series, or if it’s too little too late. The show has been haemorrhaging viewers for several season with many complaining the series is too slow, spread too thin, and deviates too greatly from the source material. Indeed, The Whisperers storyline in the comic features Carl Grimes as a major player. Considering the character has been killed off, and series mainstay Rick Grimes (played by Andrew Lincoln) is also leaving the show soon, is there enough continuity left to keep core fans committed? Time will tell. 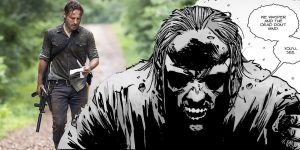 A 5-minute trailer for The Walking Dead Season 9 was also released during Comic-Con last week. Give it a spin below.

Synopsis:
Season 9 picks up after the conclusion of the all-out war the survivors waged against Negan and his Saviors, focusing on Andrew Lincoln’s character, Rick Grimes, picking up the pieces and putting together the utopian society for a post-apocalyptic world. The footage featured Grimes and the rest of the survivors assembling infrastructure in their new society, as well as conversations with an imprisoned Negan. The trailer also showed tensions running high as supposedly reformed saviors clash with other survivors in disputes about how their new civilisation should function and treat one another.

Based on the comic book series written by Robert Kirkman, this gritty drama portrays life in the months and years that follow a zombie apocalypse. Led by former police officer Rick Grimes, his family and a group of other survivors find themselves constantly on the move in search of a safe and secure home. But the pressure each day to stay alive sends many in the group to the deepest depths of human cruelty, and Rick discovers that the overwhelming fear of the survivors can be more deadly than the zombies walking among them.