The Voices Return in 1st Trailer for Amityville: The Awakening 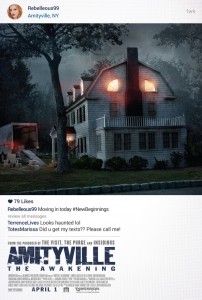 After 2 years of being on the back-burner, Amityville: The Awakening is finally gearing up for a cinema release. To remind us that the film is still going ahead, the trailer from 2014 has been released online again.

“Kill them all!” the voices whisper. Set to be a sequel to the 1979 original film, Amityville: The Awakening sees new family move in to the Amityville house of horrors who are, once again, subjected to unspeakable evils. Children Belle and Juliet are unaware of the house’s bloody past and fear their mother is hiding something, having moved them there to save money to pay for the treatment of their comatose brother.

The trailer is filled with some surprisingly affective scares; the dead-eyed stare of the brother who’s in a coma is terrifying and there is an undeniably eerie atmosphere present throughout. The blurring of reality and fantasy looks suitably scary with Belle, in particular, struggling to differentiate between the two. As there’s no father in this story it will be interesting to see who will be the one to kill the family – if the sequel plans to go down this route.