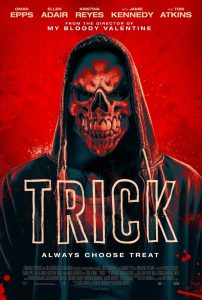 Trick, the new Halloween-set horror film from Todd Farmer and Patrick Lussier (Drive Angry, My Bloody Valentine 3D), will be released in theatres, On Demand, and on Digital HD just in time for Halloween—and the official trailer looks like we’re in for a treat!

Lussier and Farmer co-wrote the film, with Lussier also directing. The plot centers around Patrick “Trick” Weaver, a masked killer who, after slaughtering his classmates at a costume party, returns each Halloween to up his body count. The truly scary part? Trick was seemingly shot and killed by Detective Mike Denver (Omar Epps) years ago, but the bullets don’t seem to have slowed him down.

Horror legends Tom Atkins (The Fog, Halloween III: Season of the Witch) and Jamie Kennedy (Scream) also star. The flick will be released by RLJE Films on October 18th.