THE TRAILER FOR COVEN CASTS A SPELL 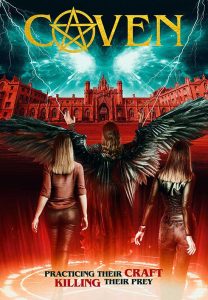 From director Margaret Malandruccolo, supernatural horror film Coven has summoned up a new trailer, and something wicked this way comes!

In the film, five undergrad witches come together to invoke the ancient powers of the witch Ashura. When one witch is killed, the surviving members are sent to find a new witch so they can complete their coven and finish the ritual. But as their leader absorbs Ashura’s power and unleashes hell on campus, only one young witch can stop her.

Lizze Gordon, Jennifer Cipolla, Margot Major, Adam Horner, and Terri Ivens star in the film, which comes to us from Uncork’d Entertainment.

Coven will cast its spell on DVD and Digital from July 14th. Check out the trailer below!