CBS All Access has unveiled the full trailer for its series adaptation of Stephen King’s 1978 novel The Stand—and the Dark Man’s presence looms over the proceedings! 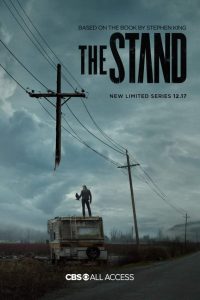 The limited event series, which will feature an all-new ending written by King himself, was directed by Josh Boone (The New Mutants) and showrun by Benjamin Cavell and Taylor Elmore. The plot centres around a devastating plague that wipes out the majority of the population, leaving a handful of survivors embroiled in a struggle between good and evil. Some feel compelled to seek out Mother Abagail, a 108-year-old woman, while others are drawn toward the embodiment of evil himself, Randall Flagg, the Dark Man.

The Stand will premiere on CBS All Access on December 17th. Choose your side and watch the official trailer below.