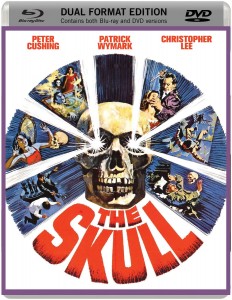 Synopsis:
In The Skull Dr. Maitland (Peter Cushing), a collector of morbid items, is offered the skull of the Marquis de Sade, but he is unaware of the possessive power the skull embodies and it soon has a drastic and deadly effect on his sanity.

The Skull is based on a short story by Robert Bloch and you can tell the film doesn’t have a lot to work with plot-wise. The story is a simple Gothic tale laced with dread and the macabre. From the items Dr Maitland owns – including a book made out of human skin, to the sinister atmosphere that rests permanently on the film’s edge, The Skull is a masterful tale of terror. It may be short, but it is very sweet. Director Freddie Francis takes advantage of the short script and benefits from the film’s lack of dialogue, as it gives him the perfect opportunity to bring the film to life with his inventive visual style. Lighting and sound is used in such an enthralling, interesting way that each scene becomes mesmerising. The film mixes traditional Gothic technical elements like shadowy lighting and obscure camera angles with a contemporary splash of colour. The skull itself shines green and pink lighting is used to emphasise the film’s desire to be visually different and impressive. It works well at giving The Skull a dangerous edge, making each scene visually surprising and unpredictable.

The second half of the film is a true master class in suspense-building and increasing tension. There are moments when not a word is spoken for minutes and all we are shown is an alternating image of the skull and a man’s face. Using nothing but music, an overwhelming sense of fear is created with such an intensity it becomes almost unbearable. Never has the simple image of a skull been so foreboding. Other times there is no music at all. We could be shown a very natural and realistic scene with a close-up of Peter Cushing’s sweat-dripped brow being enough to make your own palms sweaty. Whether this is down to underlying tension present throughout the film or Peter Cushing’s undeniably absorbing screen presence, you can decide. Either way, The Skull is a superb horror classic with a palpable sense of atmosphere.

I can’t help but be charmed by horror films from the past. Even though it’s easy to spot the strings holding the skull as it floats ominously around the screen, there is an inescapable sense of terror within this action. One particular favourite scene of mine is a bizarre dream sequence where Maitland is forced to play Russian roulette in front of a judge. It’s so beautifully bonkers and marks an important shift in the film. From this point, we know that Maitland is fully under the skull’s control and there will be little he can do to stop it. He should probably listen to Christopher Lee – who plays Sir Matthew Phillips – and get rid of the damn thing. Alas, Peter Cushing falls helpless at the power of the skull and he gives an understated, yet perfect performance. You can feel the horrors infecting his own skull and a simple smile or turn of the head is enough to understand that he is losing his grip on reality. The music adjusts with ease to emphasise Maitland’s downward spiral in to madness; a harsh organ soundtrack coupled with terrifying violins makes for a frightening, unpredictable and unforgettable  climactic finish to the film.

The Skull proves that less is more as it beautifully brings a brief story to the big screen in a polished, effortless manner. It really is a delight to watch and a must-see for fans of a menacing atmosphere and lovers of all things insane.

The special features are as short and sweet as the story itself and feature two discussions by Kim Newman and Jonathan Rigby. They both give similar and equally interesting insights in to The Skull, exploring the film with regards to its historical context and effect on the horror genre as whole. They also examine the film itself, pointing out important scenes and the deeper meanings present within it. They both draw almost identical conclusions, but are both equally as fascinating to listen to.