Doctor Sleep, a sequel to Stephen King’s The Shining, is getting a film adaptation. The project is in pre-production over at Warner Bros., who have just released casting news. The story features a grown-up Danny Torrance who will be played by Ewan McGregor; he’ll be joined by Rebecca Ferguson playing cult leader Rose the Hat and Zahn McClarnon will be Crow Daddy.

Today’s casting news is for characters all King fans should recognise: Alex Essoe (Starry Eyes) will play Wendy Torrance and Carl Lumbly will play Dick Halloran. If you’re confused by the age discrepancies (or lack thereof) between McGregor and the two newly announced cast members, obviously you haven’t read Doctor Sleep. Without giving potential spoilers, it’s important to know that the novel The Shining has a very different ending than Stanley Kubrick’s 1980 film adaptation. I also have one word for you: Flashbacks.

It’ll be a while until we have a trailer, or even an official synopsis; Doctor Sleep is currently targeting a 2020 release. The film is being helmed by Oculus and Gerald’s Game director Mike Flanagan. You can read the novel’s synopsis below. 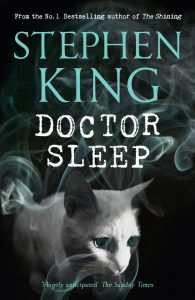 On highways across America, a tribe of people called the True Knot travel in search of sustenance. They look harmless—mostly old, lots of polyester, and married to their RVs. But as Dan Torrance knows, and spunky twelve-year-old Abra Stone learns, the True Knot are quasi-immortal, living off the steam that children with the shining produce when they are slowly tortured to death.

Haunted by the inhabitants of the Overlook Hotel, where he spent one horrific childhood year, Dan has been drifting for decades, desperate to shed his father’s legacy of despair, alcoholism, and violence. Finally, he settles in a New Hampshire town, an AA community that sustains him, and a job at a nursing home where his remnant shining power provides the crucial final comfort to the dying. Aided by a prescient cat, he becomes “Doctor Sleep.”

Then Dan meets the evanescent Abra Stone, and it is her spectacular gift, the brightest shining ever seen, that reignites Dan’s own demons and summons him to a battle for Abra’s soul and survival. This is an epic war between good and evil, glorious story that will thrill the millions of devoted readers of The Shining and satisfy anyone new to this icon in the Stephen King canon.