The Set of The Conjuring 2 Receives a Priest’s Blessing 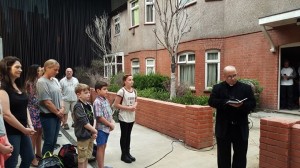 As the first day of shooting begins on The Conjuring 2: The Enfield Poltergeist, producer Rob Cowan shares an on-set snap which shows a priest blessing the set before filming commences. Now, that’s spooky. Although, if the true life tale the film is based on is anything to go by, it’s a good idea to keep any possible evil spirits at bay.

The Enfield Poltergeist sees Vera Farmiga and Patrick Wilson returning as the Warrens to help rid a family of a poltergeist that has concerned itself with their young daughter. The first film garnered a lot of attention and was praised both by critics and audiences alike. After earning a staggering $318 million at the box office, it is no surprise we’re getting another entry.

With James Wan returning as director and an intriguing, petrifying premise, my expectations are high. The Conjuring 2: The Enfield Poltergeist will be released on 10th June 2016.