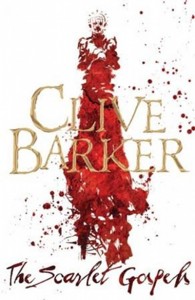 The Scarlet Gospels sees the long awaited return and a crusade to the heart of purgatory for two of Clive Barkers most powerful and resolute characters.

The Cenobite Hell priest infamously known as Pinhead, although he’s none too fond of that nickname and anyone using it will experience his knowledge of pain and its mechanisms, usually via the odd hook and chain attachment. And occult private investigator Harry D’Amour, a man tattooed to within an inch of life with elaborate warning and protective glyphs.

The story starts of course with the Hell priest and the last remnants of an order of magic that has moved behind the shades of civilization for centuries. Five magicians bring one of their brethren back from the dead only to be interrupted in brutally gruesome fashion as our favourite priest literally takes them apart in his search for the last magical secrets to bolster his arsenal.

‘He looked like a creature that had lived to long, his eyes set in bruised pools, his gait steady but slow. But the tools that hung from his belt – an amputation saw, a trepanning drill, a small chisel and three silver syringes – were, like the abattoir workers chain-mail apron he wore. Wet with blood: confirmation that his weariness did not apparently keep him from taking a personnel hand in the practicalities of agony.’

Harry and his partner, the blind medium Norma Paine investigate the final wishes of the dead, a new case comes in and he jumps straight into a setup. He finds a Lament configuration box, a puzzle box hiding its darker intentions behind gifts of pleasure and reassurance. This box opens a gateway to Hell itself and its Pinhead with his mutilated assistant waiting on the other side. A brutal fight ensues and Harry survives by the skin of his teeth

The Hell priest is desperate to get the intrepid investigator into purgatory and Harry with his band of collaborators are forced into taking action when his friend is kidnapped. Pinhead has a plan, one that’s now ready for fruition, Hell itself will be his and Harry D’Amour will bear witness. The Scarlet Gospels will be written.

The story bounces between the two journeys, Pinhead travels to the outer reaches of hell, to Lucifer’s Cathedral and his captive ensures the Harrowers follow (the Harrowers is the nickname Harry and his band are given along the way, reminded me a little too much of the borrowers and was never explained). His group contains a hard as nails female named Lana and two gay males that engage in countless innuendo laden dialogue. As a group they lean toward unconvincing which comes from them appearing almost out of nowhere and yet being instrumental to the story. Maybe if they’d come with a bit more detail and depth I would have been more comfortable with them but it was more the unfeeling savagery around the Hell priest that captured my attention.

The wold building of Hell was another highlight, the hierarchy of the order and the Mourning Star, Lucifer himself. God’s favourite son and Pinhead, intense in his desire to show reverence at the feet of his lord, the devil himself. There are many merciless horrors in this world as you would expect but the taking of Hell starts with the most innocuous of creatures. Paper birds, origami cranes, caged and inscribed with execution writs of cindered scale, when it found its intended victim only eight or nine heartbeats were left.

‘Once the writs reached their victims, they reconfigured in a matter of seconds the organization of their innards,’

That pretty much says it, and this is all stems from the knowledge gained from the many magicians of earth in their last moments, believing that telling everything would spare their lives.

The Scarlet Gospels has finally been released as a heavily edited version and it certainly felt like it, over half the original text was cut, missing many of the excerpts he leaked in the 20 years it’s taken for it to see daylight. Jesus of Nazareth, whose crucifixion on Golgotha was excluded along with any mention of Joseph of Arimathea, Pinhead’s genuine Cenobitic name and the origins of the Cenobites were not explored as Barker hinted at. A shame really but there is still much of the Barker we know and love. However at times and as a result the story felt somewhat rushed and incomplete. Whether the full version of Clive Barkers epic tale ever sees the light of day, I don’t know but I for one would love to read it.

It’s still an enjoyably graphic depiction of Hell, there’s plenty of barbarity described in the way Clive Barker excels at, the scenes at Lucifer’s Cathedral were riveting and completed the final third of the book but you can’t help thinking the rest could have been better. It’s at this point that you realise the story is primarily about Pinhead not his human counterparts, maybe a finale scribed in blood as should the Scarlet Gospels be written. If you were expecting a battle between the two iconic characters then you’ll be disappointed, Harry is a witness and just along for Pinheads ride. Not everyone lives of course, some are changed forever and the door has been left fractionally ajar for another visit to these characters, we can but hope.

Pinhead rocks and this is well worth 4 big ones.