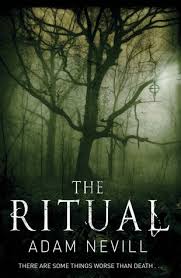 ‘And then the nearest part of the shadow, that defined itself by the thinnest light of the torch that brushed that place, moved. Raised itself no more than a few inches, in the way a stalking cat will engage in the next step towards its prey.’

I’m almost ashamed to say that The Ritual is my first read from British supernatural horror author Adam Nevill and I was for the most part quite impressed with the characterization, tension and pace of the story.

Four old University buddies decide to relive their youth and at the same time rekindle relationships that had deteriorated over the years. Their great idea being a three day camping hike through the unforgiving Scandinavian wilderness and an adventure that does just slow bleed terror and distress for the first half of the book anyway.

The story is told from Luke’s point of view, who with Hutch are the two members of the group that are physically fit enough to undergo a strenuous hike. Dom and Phil are the married with family, secure jobs type and the onset of middle age is fast taking its toll on their general well-being, not to mention the extra weight they carry.

The characters are nicely fleshed out as the story progresses, some hard hitting home truths come to light amidst the complaining and arguments. Predictably the weather turns and they wander of the beaten trail to be confronted by a freshly killed corpse hanging from a tree. But what the Fuck is it? They also find an abandoned dwelling and against the wishes of some members of the party decide to shelter for the night. There are some extremely worrying artefacts in the loft though and the foreboding feeling that this trip isn’t going to be one filled with enjoyment takes off like a man hunted by the inconceivable.

‘Even the cold black air seemed to move about them and through them with a sense of its own purpose.’

The terror ramps up extensively when one of the group is literally ripped from his tent and stolen off into the night, they are now lost in the middle of a forest with no end and somefuckingthing is hunting them. Panic and despair become prevalent and the first half of the story is all about survival. The premise is however a very familiar one, the author excels at detailed description and he puts you in that bloody forest, tense and almost a fatalistic expectancy.

‘It was not moving. Immobile as a boulder, long as a fallen log on a forest floor, it was nothing to a casual glance, or even peripheral vision. A long dark reaching form that only a man petrified by the hyper-alertness of a hunt might investigate with a second look.’

The second half of the story for the most part didn’t really continue in the same vein, the supernatural element touched on in the forest was expanded and this was the one thing that hold it all together. The introduction of Blood Frenzy was a bit lame, a true black metal music band mixed up in sacrificial elements of the old God’s just didn’t entirely fit the setting already created. Also Luke as the main character became slightly annoying in my eyes, even with a gun in his hand.

The forest scenes were the strongest part of the story, the author relies on the unseen and letting you imagine what’s out there. Coupled with some captivating and dynamic prose that in parts is highly detailed, maybe too detailed in an over descriptive way because it comes mighty close to curbing the feelings of unease. So for me the first half of the story rocks, the second half stumbles but catches itself before falling with a sense of what was there at the start. I shall certainly read more from Adam Nevill.