Synopsis:
After the death of his father, a brilliant college student returns to his family home along with his girlfriend and childhood friend. But the horrors from his childhood aren’t as dead and gone as he once thought…

Returning home after the death of a loved one is never easy. But for Rodger Emmerlich (Richard Harmon), his childhood home holds more than bittersweet memories in The Return, the feature directorial debut of BJ Verot.

The Return has a lot of interesting ideas and elements going for it. Its ghouls are visually distinctive—one a smoky, glowing-eyed spectre, one a skinless figure reminiscent of Julia in Hellraiser 2—and its scientific leanings set it apart from many similar films. You see, Rodger is the son of the genius physicist Esme Emmerlich (Gwendolyn Collins), who mysteriously disappeared when he and his late sister Amelia (Zoe Fish) were children, leaving behind only two massive whiteboards scrawled with complex formulas. Now as he follows in his mother’s scientific footsteps, Rodger begins to realise that her research may be in some way tied to the hauntings happening in the house.

While these plot threads are intriguing, the script—co-written by Verot and Ken Janssens—is often too ambitious for its own good. As the plot thickens and Rodger starts piecing together the mystery surrounding the unhappy home, the family drama at the heart of the story feels surprisingly light on the ground. The tension between Rodger, girlfriend Beth (Sara Thompson), and best friend Jordan (Echo Porisky) feels equally underdeveloped; Jordan clearly has feelings for Rodger, and when Beth makes the wise decision to walk away, Rodger barely seems to notice she’s gone. There’s a lot of emotion that could be wrung from the story, but Verot doesn’t squeeze hard enough. 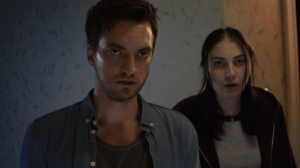 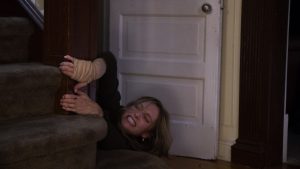 The film also makes the fatal mistake of showing its monster far too early and far too often. In doing so, it dilutes any tension we might feel about what is lurking in the shadows of the house and when it will strike. There are a few decent scares to be had, but more often than not, when the spectres show up, we haven’t had time to miss them yet.

The Return does its best to add a fresh coat of paint to the age-old haunted house sub-genre, but its story is too emotionally shallow to really make an impact. Subversive in places, old hat in others, and more than a little convoluted, there’s more to it than initially meets the eye—but not enough to make it truly satisfying.